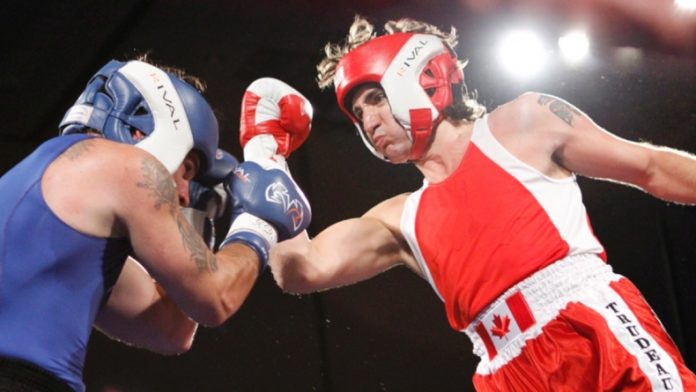 In an ideal world, the federal election in 2015 would be decided by a good old fight night. Justin Trudeau vs Stephen Harper. The idealistic pretty boy vs the smug champ. It would be a fight for the ages. Sponsored by the Royal Bank, the media coverage on this event would go worldwide. It would be the first pay per view election in history.

With the majority government seats at stake, Harper will not want to loosen his grip on the necks of Canadians everywhere. His plans for dominance being rudely interrupted by the inconvenience of an election, Harper plans to pummel Justin and his good looks off his face.

After two terms under his belt, Harper has taken advantage of a Liberal party in disarray. With no leader in sight and no one to step up and fill the vacuum, it’s been looking pretty hopeless for the Liberals. Enter Justin Trudeau. Now here was your flashy, stylish young man with the long luxurious locks. We know he’s the son of the late star politician Pierre Trudeau, but we have no idea what he stands for and whether he is even a good leader. Upon inspection, he looks very shiny and bright, so we’d like to cheer for him.

Just because Harper is 12 years Justin’s senior, doesn’t mean Harper will go down easy. Harper is very conniving and sneaky. He will literally blindside you with quick and sudden jabs and uppercuts. His power move being the “Ram and Jam”, where he bullies you into a corner and assaults you with a flurry of fists, knees, and groin smashes, while his trainers hold you down. The referee at this point in time is distracted by low flying F-35 fighter jets.

Trudeau definitely has a huge battle ahead of him. With only 1 fight to his record, he has proven to be resilient and tough by beating one of Harper’s henchmen, Patrick Brazeau. Although his fighting style resembled an octopus flailing around, he managed to knock out the heavily favored Brazeau who had martial arts training. Trudeau’s knockout must have been quite potent, since Brazeau went on a series of rampages afterward, forcing Harper to banish Brazeau from his kingdom.

Now that we know that Harper is like a video game final level boss, the question is can Justin Trudeau stand a chance against this behemoth?

Of course not. Justin is just a young pup in big dogs game. Harper is like the leader of a wolf pack. He doesn’t fight alone. His gangs take care of you and if you’re still hanging on, he’ll come and finish you off.

And just like in the movies, Justin has a few things going on for him that Harper and his dominion don’t realize. Firstly, he has the spirit of the Liberals guiding him and looking over his shoulders. Secondly, he’s got the attention and adoration of the voting public. And finally, he has the last ingredient of every underdog. He’s got the belief that he can win.

For Justin to succeed though, he’s going to have to train very hard. He can’t just run in circles and call it a day, he’s got to have a plan. So without further ado, Leaf Magazine has compiled a playbook for Justin Trudeau’s fight strategy. If he follows the playbook to the exact instructions, he should come out the winner. But it won’t be easy because Harper will be trying to stop him every step of the way.

1. Set the tone, Stand up for your beliefs

Justin has to set the tone up to the coming election. He’s got to be more active in the media and make it clear his ideas for leading the country. Canadians face pressure from higher taxes, more strict government policies, and even corruption. It doesn’t help that the Liberals are responsible for this. Justin has to separate himself from the scandalous liberal past and corruption. He has to create a mantra of policies that voters will understand easily and will want to share his beliefs.

2. The wild and the young

Justin definitely can capture the vote of the young Canadian crowd. This is a source of votes that many traditional politicians don’t capture. This is due to the idea that the young do not trust the old men who are in power. Justin, on the other hand, is young enough and more importantly handsome enough to capture the imagination of the younger voters. If he brings in fresh ideas and hopes for the younger generation he will easily win the election. He is already guaranteed the votes of adoring females, so he’s got to keep in shape and not have too many long nights out.

Harper during his tenure has managed to equate the Conservatives with the Republicans. This image is damaging for the Conservatives because many Canadians feel that the US has a major influence on Canadian law and policy. If Justin can get Canadians to be excited to be Canadian, he’s going to gain many votes. Being Canadian in particular is to hold values that are not influenced by some very backward and questionable US policy. Canadian pride on being peaceful and free. Immigrants come by the millions to Canada because of this ideal. Canada needs to remain its own sovereignty and not a state of the USA.

Harper has made the laws even more discriminating against users and advocators of marijuana. This is a mirror of US policy against marijuana even though it’s quite obvious the laws are designed to keep people in business rather than actually fighting the “problem”. Justin and his long hair will go a long way in gaining acceptance of the positive aspects of marijuana including medicinal use and reduced crime. This will be a major fight though because many in the law and enforcement industry are dependent on the relative ease of convicting Canadians who accept the use of marijuana.

Justin has to be like a breath of fresh air in a stale parliament. Canadians have a skeptical view of the current Canadian government. Harper has ruled for a while now and Canadians want to see a change as they feel he has become complacent and more dictatorial like. Justin needs to address the concerns of Canadians and give them a reason to believe things will change for the better in the future.

6. When at your lowest, use the force

Justin is faced with a double-edged sword. His connection to the late Elliot Trudeau has given him exposure easily, but some say it’s undeserving. Justin is going to have to channel the spirit of Elliot Trudeau and use this force as it’s very strong and many Canadians remember being swept by Trudeau Mania. Never was there such a feeling of wanting to let go so easily. It’s the same force that gives Hulk Hogan the energy to come back and finish off his opponent no matter how bad it looks.

7. Get the right people behind you

Justin has to realize that even if he wins, he cannot possibly carry out all his ideas without the help of the right people. There are too many into Canadian politics that are useless or even damaging. The Liberals can’t afford to have any more cases of corruption and deceit. In Ontario, the Liberals are at an all-time low in voter confidence. With that in mind, Justin has to have a tight group of leaders who are more transparent and accountable to the public.

8. Do what’s right for Canada

The last play is for Justin to always lead with the guiding light of “doing what’s right for Canada”. Canadians overwhelmingly feel that new policies are further limiting their freedom and outlook for the economy. The idea of heavy corporate influence on government policy is widely held by Canadians. If Justin remembers to do what is right for Canada, he will not go wrong. This means saying no to corporate deals that limit Canadian growth and reduces the country’s richness. It also means being strong enough to resist international influence on Canadian laws. If Justin can do this he will guide Canada into a rich and prosperous future

That’s it. Just 8 plays that will propel Justin Trudeau to the finish line on Election Night 2015. Good luck Justin, the Liberal future is in your hands.