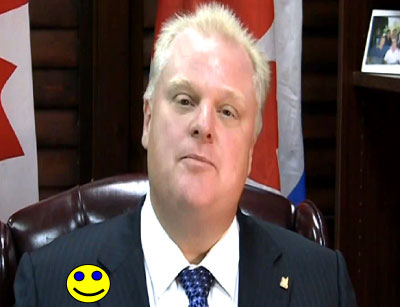 Toronto has come a long way from its origins as a violent frontier trading post town. It’s now 2012 and currently, Rob Ford reigns as Toronto’s navigator into the future. Love him or hate him, Rob Ford is a magnet for controversy.

That’s why at Leaf Magazine we started thinking of Toronto’s history of mayors and wondered whether Toronto has had anyone as hated or loved as our current mayor, Mr. Ford. After much research, we have concluded one thing. To be the mayor of Toronto, wimps need not apply. We’ve had mayors that were insane, murderers, bullies, warmongers, thieves, and other villains running the show. So without further ado, here are some of the more controversial mayors in Toronto’s history, let’s start off with Rob Ford himself:

Rob Ford looks kind of like Chris Farley from Saturday Night Live. In a way, he might just be one of Farley’s characters come to life. But he’s the perfect man for the job. It seems like Toronto is split on Rob Ford. The left thinks he’s a buffoon that is going to destroy the city, while the right swears he is their savior. The rest of us are just glad Miller is out of office.

Before he became mayor, Rob Ford was a city councilor – and a pain in the butt to the other councilors. He was known to blatantly ignore city guidelines and policies. However, he preached fiscal responsibility and customer service. He would personally handle residents’ requests rather than delegate, always being available to any calls, even servicing other residents out of his jurisdiction. He paid his office expenses out of his own pocket while bringing to attention the overspending of other councilors and their “expenses” such as a $12,000 bill for a retirement party. He even reported other city councilors to Revenue Canada for unclaimed revenue. For years he was the annoying little troll down at city hall that the others laughed at and dismissed. However, as Torontonians became increasingly angered at higher taxes and new fees, Rob Ford gained more and more public backing as the most promising candidate for mayor. So on a brisk October night in 2010, Rob Ford was elected mayor of Toronto on the platform he would “STOP THE GRAVY TRAIN” and give “RESPECT TO THE TAXPAYERS”.

But the man is not without his flaws. He’s overweight, red-faced, stout appearance; his blunt, no-nonsense approach, his foul mouth, and bullish behavior provided much fodder for the media to report on. Depending on whether it’s the Toronto Star or the Toronto Sun reporting, here are some blunders or ingenious moves of Rob Ford. “…with extra mayo and pickles!!”

Mayor Miller was the reason why Rob Ford is our current mayor. Perceived as the worst mayor in the history of Toronto, anyone other than Miller was what Toronto chose in their next election. While Miller served 2 terms in office, his introduction of new taxes and user fees pushed voters to the limit. Some of these included the $60 motor vehicle registration tax, the 5 cents plastic bag fee, adding a new land transfer tax, allowing a garbage strike to go on over the summer, and failing to negotiate and giving in to union demands.

Toronto was Miller’s playground for his pet projects, but he seemed to ignore the fact that the city was getting costlier for businesses and homeowners to live in. In 2010, he announced that he was not seeking re-election to concentrate on being there for his kids when he knew really that no one would have voted for him. Mel Lastman was mayor when Toronto amalgamated and became known as the Megacity. A born salesman, he founded Bad Boy Furniture and is famous for his “Who’s better than Bad Boy?… Nooooooobody!” slogan. Mel Lastman was very outgoing and a natural promoter of his business. Lastman proved to be a very popular mayor where he was re-elected in 2000 with 80% of all votes. His appeal was his simple nature and everyday man personality. Like a lovable fool, he made mistakes and said stupid things but he was our mayor. His critics felt he was embarrassing as a mayor of such a large world-class city.

Here are some highlights of Mel’s career: William Lyon Mackenzie was the first Mayor of Toronto in 1834. Mackenzie ran his own newspaper called “The Colonial Advocate” and the “Constitution” Mackenzie feuded with a group of families called the “Family Compact” which ruled Upper Canada for years. In 1837 he had enough of their shit and led an attack called the “Upper Canada Rebellion” which failed miserably. He then fled to the USA and returned to try to create a republic of Canada on Navy Island in the Niagara River. This plan also failed when the Canadian government stepped in squashed it dead in its tracks. Powell, the 5th mayor of Toronto was known mostly as the guy who thwarted William Lyon’s Mackenzie attempt to rebel against the “Family Compact”. A member of the Family Compact himself, when Mackenzie’s posse captured Powell, he killed one of them with his pistol. He almost killed Mackenzie as well but his gun jammed. As mayor, he focused on keeping the city under control through militia groups and expanded the police department. “And man that was the highest I EVER got!!!”

Allan Lamport aka “Lampy” was mayor of Toronto from 1952-1954. He was known for his interesting use of words and metaphors. Lampy hated hippies and was a vocal opponent of them even trying to get police and bylaws to drive them out of the Yorkville area. He once said to them “Why don’t you people take baths? How do you go unwashed and have dignity?” We can thank Lampy also for being the first to oppose laws which forbid all activities on Sundays (the Lord’s Day).

Here are some of Lampy’s more memorable quotes: Sherwood was Toronto’s 7th mayor in 1842 and is remembered for being a sore loser. In 1841, he lost his bid to become mayor to the Reformers and brought in his gang from Scarborough and attacked the Reformer’s victory parade. One man was killed by gunfire. Normally this would not be good for a politician to be associated with, but this was a time of lawlessness, so Henry Sherwood was elected mayor the following year. Sherwood to his credit was responsible for the paving of the roads and street lighting across Toronto. “Original member of the fight club”

Sam McBride was a pretty good mayor for Toronto (1866), as he with instrumental in the creation of the TTC and the Coliseum at the CNE. He also helped develop Toronto’s harbourfront. Sam was also a speed freak, even making the world record for harness racing across the ice in 1907.

Sam, however, was not a guy you would want to piss off. He once in a fit of rage threw a can of beans at a fellow alderman, narrowing missing his head and ended up in the wall behind his target. He also enjoys fistfights at his alderman club, which might be the first occurrence of a fight club. “Orange you glad to see me?”

However as Toronto became more multicultural, Saunders was defeated by Nathan Phillips when Saunders was perceived to be intolerant of religious minorities. Mayor Nathan Phillips was Toronto’s 52nd mayor in 1955. He was also Toronto’s first Jewish mayor. His significance lies in being at the point of change in Toronto from a Protestant run town to a more multicultural and open city. he was in fact, the first non-Protestant mayor ever, and also the first in the 20th century who was not a member of the Orange Lodge. Mayor Nathan Phillips was known as the “mayor of all the people”.
Toronto transformed into a more modern metropolis under his rule, many buildings were demolished and replaced with newer ones. Of course, he was involved in the selection of Toronto’s new city hall and its design (Nathan Phillips Square). Toronto ushered in the 80’s with Mayor Art Eggleton as the helms. Under Eggleton’s watch, Toronto grew and made changes to its skyline, including the building of the Skydome, the CBC building, and the Convention Centre. Eggleton was a true public servant having spent most of his life in politics. Starting in the city council, Eggleton became mayor and then move to federal politics and is currently on the Senate.

Mayor Eggleton also helped increase social housing in Toronto and set up programs to help people from multicultural backgrounds integrate into Toronto society. While acting as Minister of National Defence he was fired for hiring his girlfriend to do some research work.