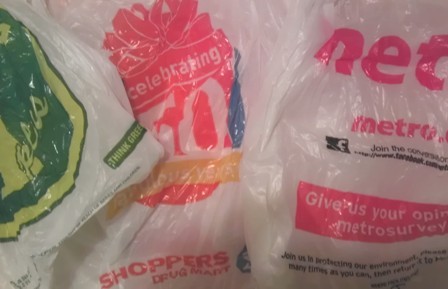 Congratulations Toronto, soon you will not have to argue about greedy retailers charging you 5 cents for a plastic bag anymore!

That’s because Toronto council in a move that is more about their feud with Mayor Rob Ford than anything else has decided to ban the use of plastic shopping bags at all retail locations in Toronto. The bylaw will become effective on January 1, 2013.

The proposed bylaw is the most idiotic and irresponsible thing that has come out of the city hall’s bin of stupid ideas. Rob Ford had asked the city council to kill the 5 cents fee for plastic bags that retailers are currently charging.

Instead, city council has decided that they want to make Rob Ford foolish by banning the use of plastic bags altogether! Ford was visibly upset when pressed for questions, stating the decision “makes no sense”, “I think we’re gonna get sued. I don’t see how we’re gonna win that. It’s gonna be very difficult. It’s not a smart move by council to ban plastic bags. I don’t think it’s gonna hold up..”

It is already bad enough that Metro, Loblaws, No Frills, etc are quietly making millions of dollars on plastic bags that are marked up by at least 500%. Now without the availability of plastic bags, shopping will become more and more inconvenient.

If the retailers are not allowed to use plastic bags, their only other choice is to sell fabric and paper bags. They may give it away, but it is highly unlikely since they have tasted the profits of the plastic bags already.

Fabric reusable bags also get dirty, especially when you have carried meat products and the juices and blood seep into the fabric. Since the bags are black, it is hard to tell that the bag is dirty and you may get a nice case of food poisoning on your next grocery run. I have personally found the “reusable” bags to be a major inconvenience and cumbersome to handle.

Furthermore, there are many uses for plastic bags. In my household plastic shopping bags, I bought for 5 cents are recycled in kitchen garbage bags, impromptu carry bags, lunch bags, storage bags, doggy doo bags, the list goes on and on.

These plastic bags have their uses beyond that you carry your groceries in them. Plastic bags are not really an environmental problem as they take up very little space in landfills.

Now a group of frazzled councillors thinks they know better and would like to impose their ideas on the people of Toronto.

This is also the same group of people that introduced the plastic bag tax in the first place and gave retailers a way to make huge profits on the illusion of “saving the environment”. Shiner, the councillor who introduced the idea seems to think he knows what is good for you so you should just shut up and let him decide for you.

Toronto city council is a joke and the whole lot needs to be removed from their place. They do not deserve to have the position the people of Toronto trusted them to treat with care.

They have become self-important visionaries that are also trying to make a mockery of the elected Mayor Rob Ford. Perhaps Ford is not the mayor they wanted to work with, but it does not mean they should not take the rest of Toronto hostage for their pathetic mind games.

Watch the interview below as a pair of smug city councilors pat themselves on the back for this stupid decision.